As we face the situations of the upcoming new age that has been indelibly shaped by COVID-19, a so-called “post-COVID-19 era”, “Green New Deal” is emerging as its key task. Its goal is to catch two birds of climate change response and economic growth through transition to “Low Carbon Eco-friendly Economy.” This issue’s Q.FACT takes a look into global Green New Deal trends, the Korean government’s policy basis and Q CELLS’ roles in the age of the Green New Deal.

Many countries around the world have rushed into establishing “Green New Deal” policies that promote job creation while also responding to climate change. Green New Deal is a combination of “Green” and “New Deal (a series of economic policies led by US President Roosevelt to overcome the Great Depression in the 1930s).” It is the government’s policy to stimulate the economy while trying to cope with environmental problems by investing in the green industry sector.
Green New Deal has been consistently discussed and suggested by many groups and nations such as the United Nations Environment Program(UNEP), World Bank, US Democratic Party and European Union (EU) after the “Green New Deal Group” in the UK proposed it in 2008. In particular, the Green New Deal is considered the key task of the upcoming new age following the end of COVID-19, – the so-called “post-COVID-19 era. ”The first reason is that COVID-19 is closely related to humanity’s destruction of nature and the resulting climate changes. It is noted that frequent emergence of new viruses in the 21st century is actually attributed to reduction in wildlife habitats resulting from humanity’s indiscriminate environmental destruction and humans’ frequent exposure to virus-carrying animals. Accordingly, our interest in humanity’s life of coexisting with the post-COVID-19 environment has grown ever-more. The second reason is to resolve increased unemployment rates caused by shrinking economy due to COVID-19. Transition to a low carbon economic structure, including renewable energy, electric cars and energy efficiency, is expected to create diverse economic and social value.
The European Union (EU) announced the “European Green Deal” in December, 2019, promising that they would fulfill the goal of becoming Carbon Neutral, bringing total carbon emissions to “ZERO” by 2050. “Carbon Neutral” means offsetting carbon emissions produced by economic processes through carbon reduction activities, such as new renewable energy development, reforestation and Certified Emissions Reduction purchase.
With suggestion of detailed goals for each major sector including energy, architecture, industries and transportation, the EU announced the 100-billion euro Just Transition Mechanism. The Just Transition Mechanism, as part of the European Green Deal investment plans, aims to prepare a Just Transition Fund to support regions and workers that may suffer in the process of Carbon Neutral transition. It had secured roughly 40 billion euro as of June this year.
According to the International Renewable Energy Agency (IRENA), it is expected that 130 trillion dollar investment in global energy conversion to carbon zero by 2050 will create 2.4% GDP growth, 42 million renewable energy related jobs (4 times more than current jobs created) and about 100 million jobs related to all energy (40 million more than current jobs created). If such post-COVID-19 restoration plans remain on right track, it is expected to become the most meaningful green investment in history. 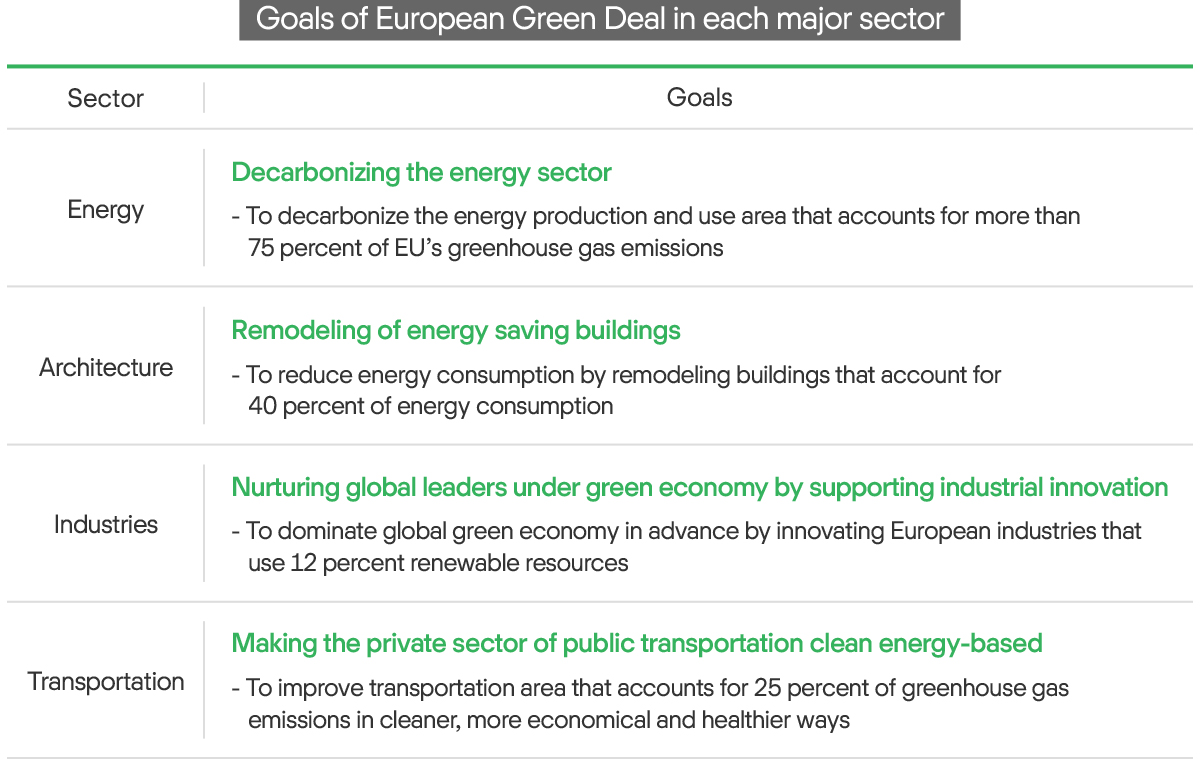 The Korean government announced the Korean version of the New Deal policy on July 14 to overcome COVID-19 and take a leap toward becoming a leading nation. The Korean-version New Deal policy, based on the Digital New Deal, Green New Deal and strengthening of social safety networks for employment, contains plans on creating 1.9 million jobs by investing a total of 160 trillion won until 2025. The sector in which the largest investment will be made is the Green New Deal, with plans to create 659,000 jobs by investing 73.4 trillion won. The reason behind the government’s focus on the Green New Deal is simple. It is because an economy built by the Green New Deal is expected to improve quality of life and also provide opportunities to create jobs and new industries at the same time.

Source  |  Ministry of Economy and Finance of Korea

Green New Deal announced by the government will be implemented with projects in three areas: green conversion of urban, spatial and living infrastructure, construction of green industry innovation ecosystems and dissemination of low carbon and distributed energy. For green conversion of urban, spatial and living infrastructure, to begin with, 230,000 old buildings including public rental housing, daycare and health centers will switch to Zero Energy¹. Furthermore, 25 smart green cities will be developed with a focus on building green smart schools through remodeling. For green industry innovation ecosystem construction, 10 smart green industrial complexes will be developed with 100 smart ecological and 1,750 clean factories. To disseminate low carbon and distributed energy, supply of new renewable energy will be increased with eco-friendly power generation systems to be constructed in 42 island areas and more community participation solar PV projects. The government will focus on disseminating green mobility including electric and hydrogen cars by supplying 1.13 million electric cars and 200,000 hydrogen fueled cars, and providing aid for early scrapping of 1.16 million diesel cars. 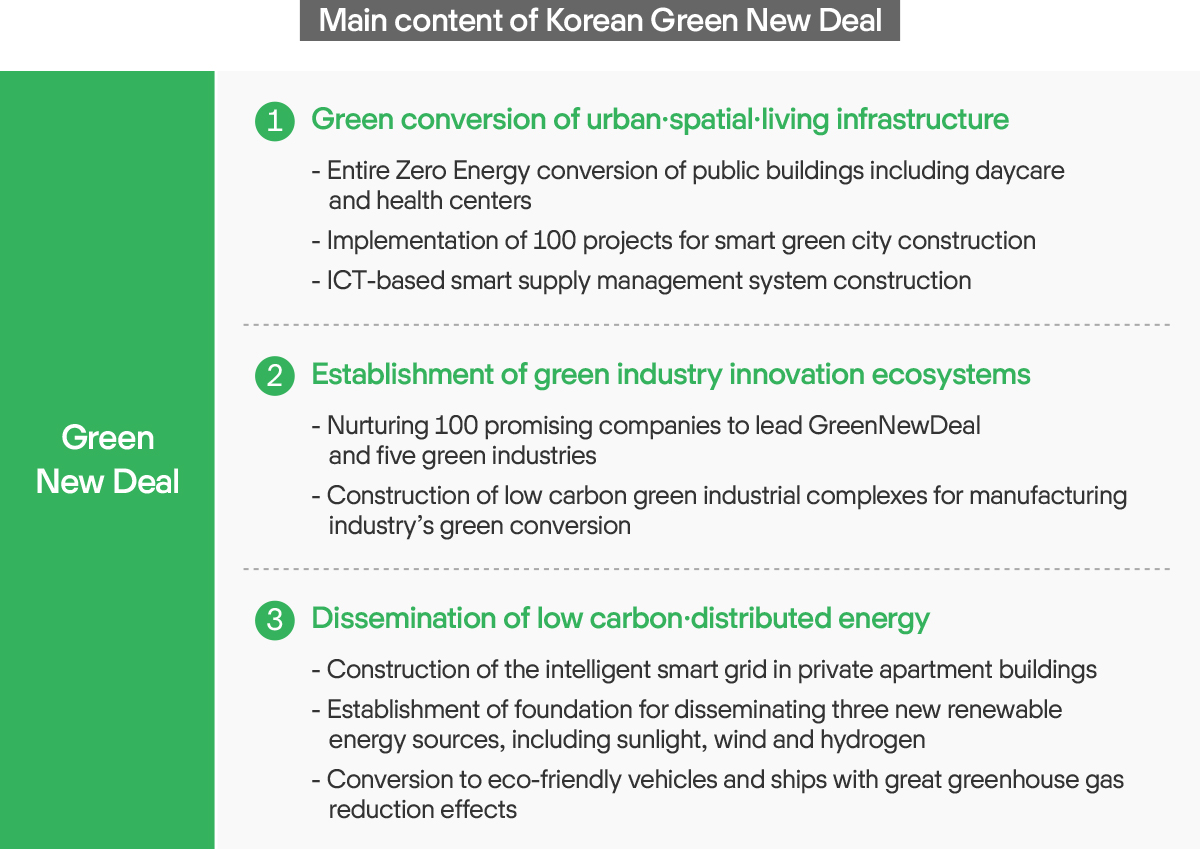 FACT 3. Q CELLS will lead the age of the Green New Deal with solar PV

Q CELLS, a global solar PV leader, is cited as perfect for playing a pivotal role in the Green New Deal age, based on its accumulated technology and experience.

Q CELLS has recently signed an MOU with Hyundai Motor Group on joint ESS development for reuse of electric vehicle batteries. This is connected with the Korean Green New Deal policy of low carbon and distributed energy dissemination. Q CELLS will be able to discover large ESS projects by utilizing new renewable energy related customers and infrastructure in the future through cooperation with Hyundai Motor Group. When it comes to new renewable energy, one thing that cannot be left out is “Hydrogen Energy”. Hanwha Group plans to make inroads into the US hydrogen ecosystem market. For this, Q CELLS will take charge of supplying solar PV modules used for hydrogen charging. It will open a way of approaching one step closer to achieving “Zero” greenhouse gas emission by supplying power to charging stations through solar PV power generation.

Before this, Q CELLS obtained “Carbon Foot Print (CFP) ” certifications in the French solar PV market in 2014. “CFP” means the total volume representing CO₂ conversion of greenhouse gas emissions directly or indirectly produced through human activities or the entire process of product production and consumption. In bids for public procurement of renewable energy facilities in France, because “CFP” grades are reflected, it holds very significant meaning. The fact that Q CELLS obtained the low CFP grade is testament to its efforts to prevent environmental pollution even during production, in addition to its sales of eco-friendly products. Korea is also trying to introduce “CFP” for solar PV module products which is similar to that of France. “CFP” is a verification system that quantifies(CO₂•kg) total volume of greenhouse gases released from the entire solar PV module manufacturing process(polysilicon-ingot-wafer-cell-module). The Korean government plans to apply differentiated incentives for each grade by dividing modules into three grades according to their carbon emissions, later this year. When the “CFP” is introduced to Korea, Q CELLS' competitiveness will be strengthened further as the company has already made extensive efforts to reduce environmental pollution.

To overcome COVID-19 and the climate crisis at the same time, the entire world is driving policy transition to low carbon economy and society. As Korea also announced its transition to a low carbon-eco-friendly “Green Economy” through the Green New Deal, future possibilities of new renewable energy market expansion based on the government’s policy are limitless. Q CELLS will respond to global energy paradigm conversion in step with changes of the international environment. Moreover, it will lead the solar PV market with an elaborate strategy and quick response that can meet the Green New Deal policy.