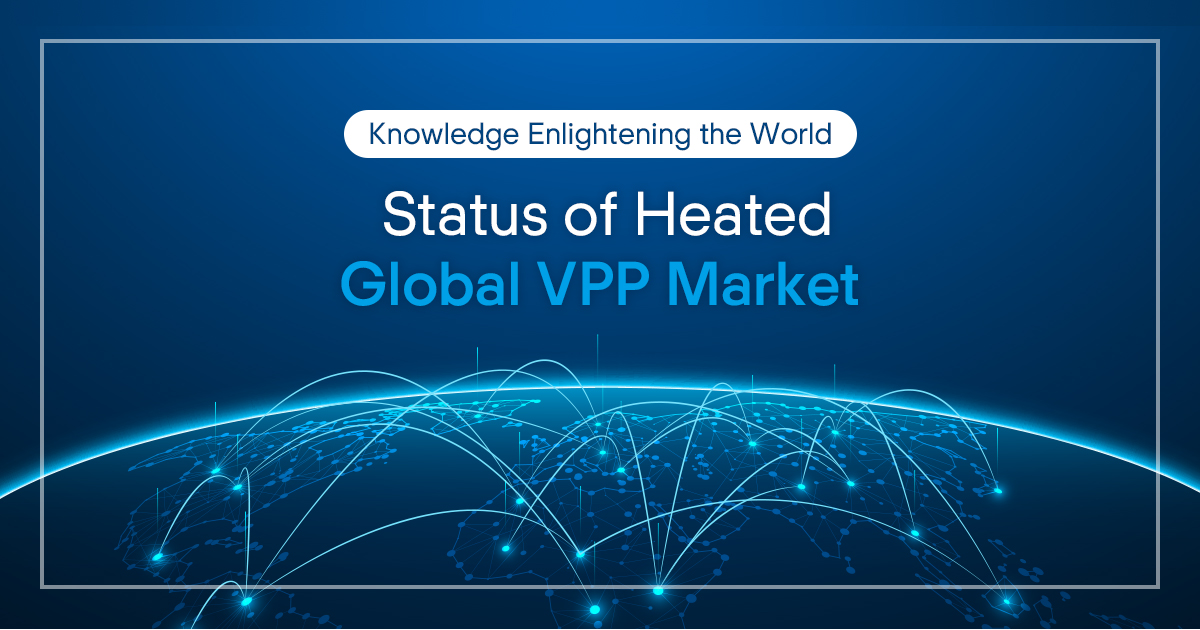 In response to the structural changes occuring in the electric power sector, brought about by the emergence of diverse energy sources represented as new renewable energy and distributed power generation, the VPP (Virtual Power Plant) market is expanding. VPP refers to a system operated as a power plant by connecting and controlling diversely distributed energy resources through ICT and automatic control technology.

With VPP development projects vigorously making progress around the world, companies are also speeding up their inroads.

Key to management of demand for renewable energy, VPP 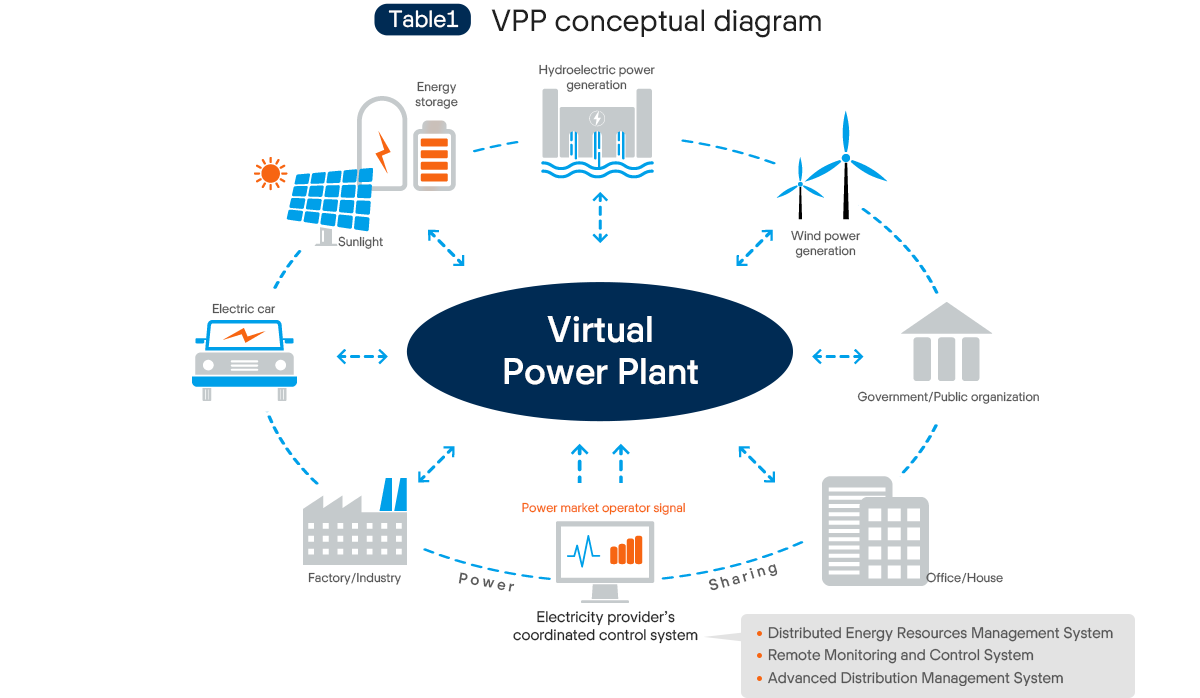 VPP enables efficient power supply by forecasting variables in power demand and supply in the process of gathering and analyzing distributed energy. It can also minimize the environmental impact of new renewable energy thanks to its optimized operation through remote integration of multiple distributed resources. It is expected that environmental factors such as weather can be resolved by utilizing digital transformation technology.

VPP in the US, considered the biggest ESS market in the world, has been developed as technology that ensures the reliability of power grid functions through demand response (DR) and load balancing technology, in addition to power supply. Further, they have applied technology that sets power costs in response to generation quantity and built systems that can automatically operate virtual power plants based on the principle of supply and demand.

Australia is in the process of constructing the world’s largest virtual power plant. Working with Tesla, the Australian government plans to install home solar photovoltaic units and batteries with their integration systems in at least 50,000 households across South Australia up to 2022. When this project is complete, it is expected to cover 20 percent of power demand and reduce power rates by 30 percent.

Japan began a virtual power plant construction and demonstration project in 2016 in order to lower dependency on concentrated large scale electricity generation after the Great East Japan Earthquake, and to safely manage and utilize renewable energy that has been rapidly spreading. The Japanese Ministry of Economy, Trade and Industry(METI) invested 4.1 billion yen in the project in 2018, to construct and demonstrate VPP comprising residential and commercial distributed energy resources.

Korea’s move toward VPP technology development and construction has quickened according to the government’s energy conversion policy. “Demand Response Market” that opened in November, 2014 is in operation, and with “Distributed Energy Resource Market” open in February, 2019, an institutional framework has been prepared for mixed VPP construction. VPP construction for efficient and stable operation of power systems is actively ongoing, centering on state-run energy companies and public organizations, and local governments are also aggressively working on construction. Seoul City is pushing forward a project that aims to have 25 autonomous districts construct a total of 100MW or higher VPP for Seoul citizens by 2025, with each gu (district) office operating a total of 4MW VPP. Ulsan Metropolitan City also plans to construct artificial intelligence-based VPP platforms and install solar PV power generation facilities of a total of 1.5MW capacity on small unused rooftops for power trading. 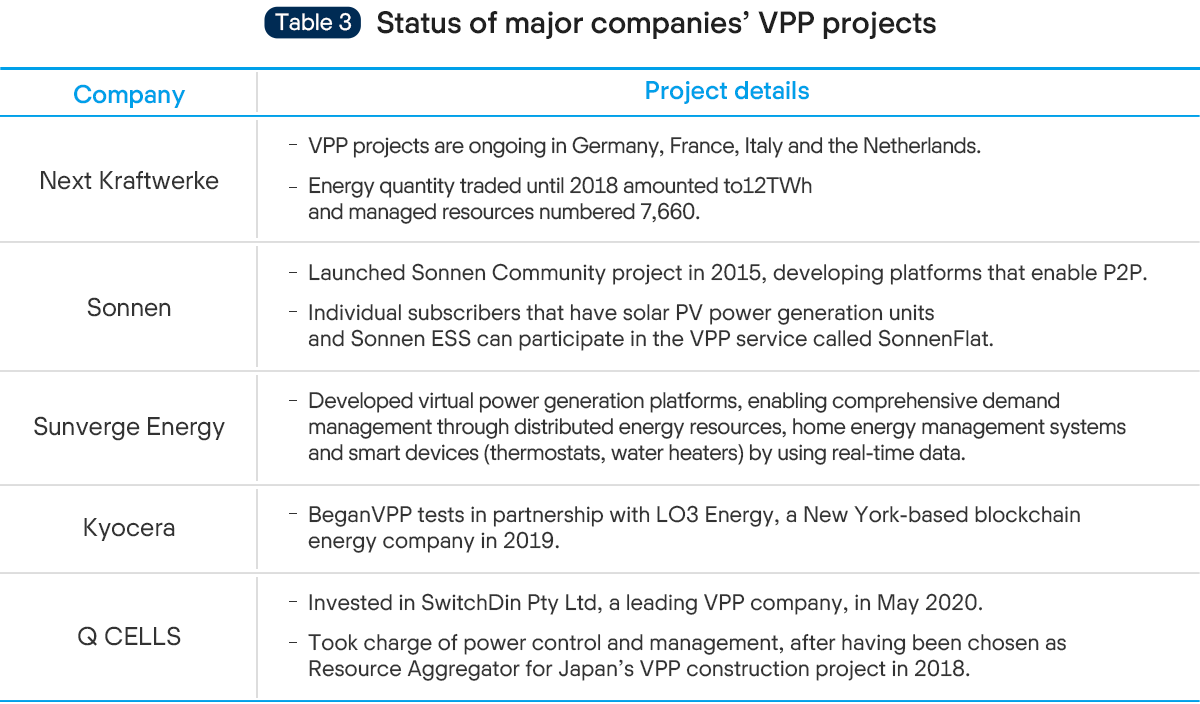 P&S Market Research, a market research institution, forecasts that the VPP market will grow to about $1.19 billion by 2023. Accordingly, major overseas companies are venturing into the VPP market one after another. Including that of Next Kraftwerke from Germany, Europe’s largest virtual power plant company, related projects are in progress in France, Italy, the Netherlands, Belgium and Portugal. Energy quantity traded in Europe up to 2018 by this company that collects and trades distributed renewable energy resources amounted to 12TWh and its managed resources numbered about 7,660 as of 2019.  Sonnen, a German home battery manufacturer, launched the Sonnen Community project in 2015 and developed platforms that enable person-to-person trade(P2P). Individual Sonnen Community subscribers that have solar PV power generation units and Sonnen ESS can participate in the VPP service called SonnenFlat.

Q CELLS invested in SwitchDin Pty Ltd in May, this year. Australia-based SwitchDin engages in EMS, IT software that controls systems to increase energy efficiency, especially specialized in VPP of the new renewable energy area. Q CELLS’ move shows its determination to expand its scope to a system solutions business with its leading ESS products in Australia that takes lead in distributed energy resource market development. Q CELLS carried out its role of power control and management under direct contracts with consumers, after having been chosen as Resource Aggregator for Japan’s VPP construction project in August 2018.