GM released the world’s first electric car “EV1” in 1996, but the project was scrapped in 2002. The reasons why manufacturing was discontinued are known to be high manufacturing costs, heavy batteries and long charging hours. Due to inconvenience caused by over an hour of charging time, maximum mileage of 160km and insufficient charging infrastructure, commercialization of electric cars was, at the time, a long way off. However, as air pollution emerged as a global issue, the electric car market has begun to expand, increasingly so in the last few years. Consecutive releases of new electric car models by global car makers are spurring the “Electric Car Age”, with electric vehicle performance having improved remarkably. The big brands are also keen on developing hydrogen cars in addition to electric cars. The age in which only eco-friendly cars can survive has arrived.

The age of internal combustion engine cars is gradually fading after 130 years of prominence.

Global car makers are also committing their efforts to developing eco-friendly cars in step with this trend. In particular, global car technology leader Mercedes Benz has announced its intention to convert all new vehicles to eco-friendly configurations within 20 years, while Hyundai Motor Company has announced that it will discontinue releases of new internal combustion engine cars from 2030. 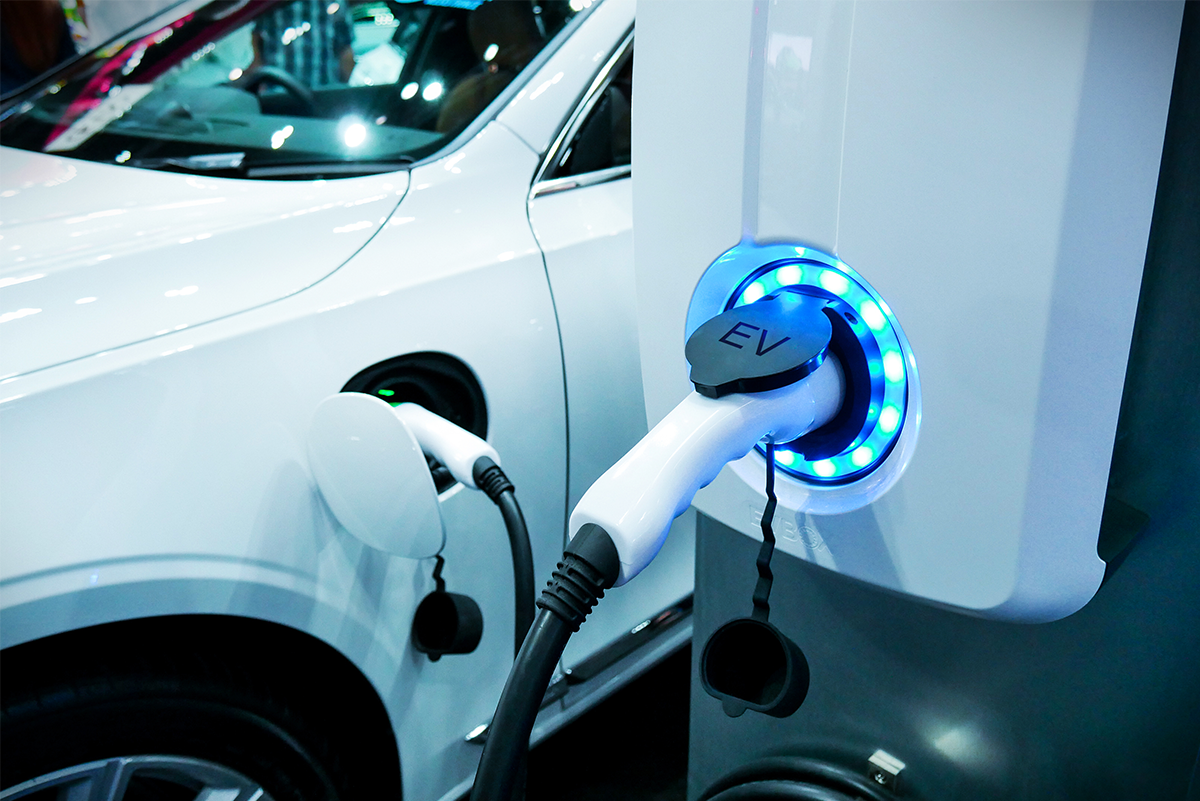 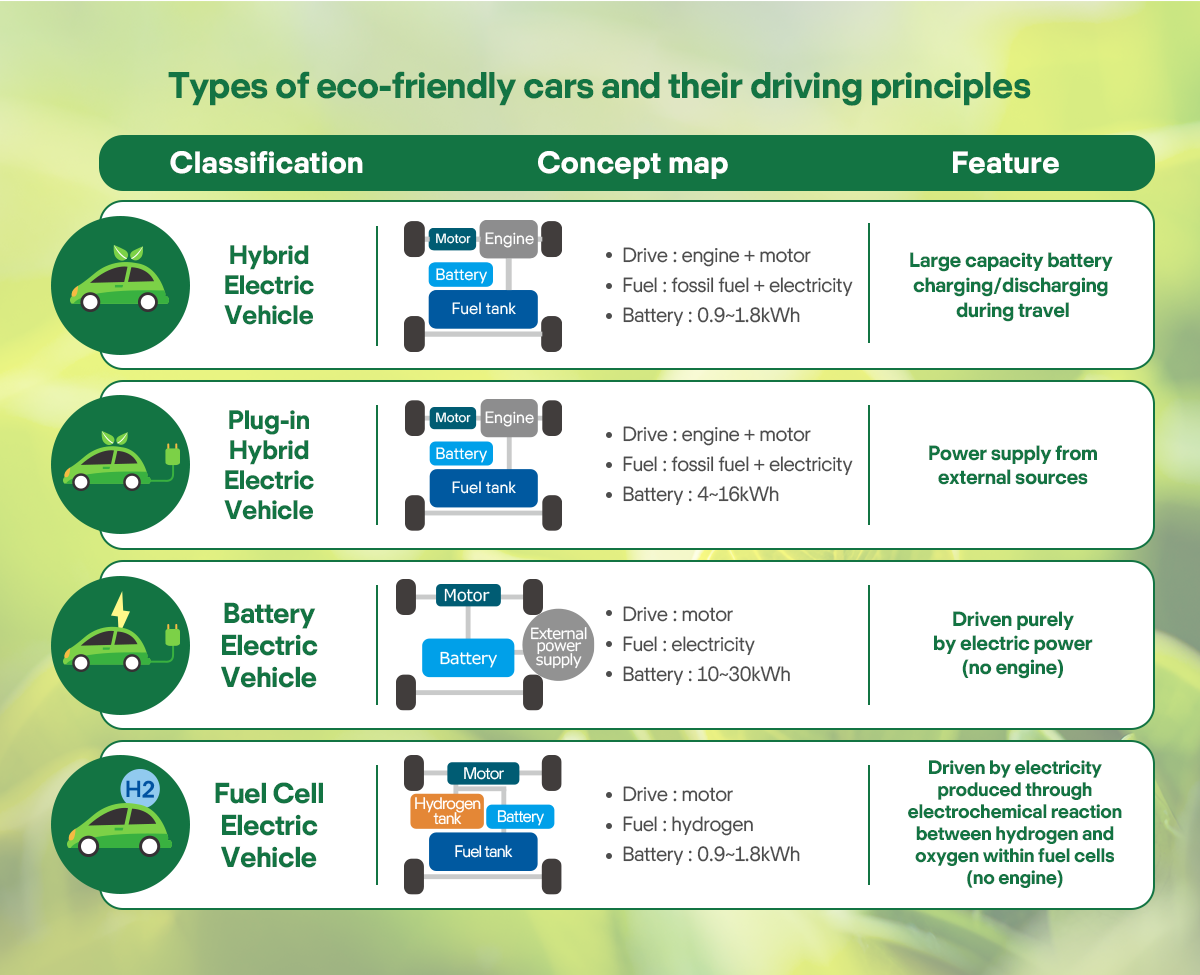 “Hybrid Electric Vehicles (HEV)” use engines and motors powered by fossil fuels.   HEV is powered by engine output due to insufficient driving power of electric cars, and they discharge approximately 40 percent less exhaust emissions than internal combustion engine cars. For “Plug-in Hybrid Electric Vehicles (PHEV),” the same principle applies as HEV, but batteries can be charged via external power sources. With a full battery, pure electric-mode driving is possible up to about 40km without exhaust emissions. “Battery Electric Vehicles (BEV),” considered the hottest model in the global automobile industry, uses a motor driven purely by electricity. They produce no pollutants with lower fuel costs, but with the shortcomings of short mileage and long charging hours. “Fuel Cell Electric Vehicle (FCEV, referred to as hydrogen car hereafter)” is called a hydrogen-fueled car, a configuration driven by electric power obtained through chemical reaction between hydrogen and oxygen. Its difference from BEV is that they drive by producing electricity, without an external power supply. They produce only a small quantity of water in the process of making electricity without any pollutants. Hydrogen cars in particular are called “Running Air Purifiers” because they can filter harmful substances such as fine dust while running. They require about five minutes of charging time, much shorter than that of electric cars. However, their shortcoming is that supply is limited by insufficient numbers of charging stations.

With the global automobile market going through a rapid shift from internal combustion engines to eco-friendly cars, solar PV-charged cars have also begun to emerge. Although sunlight is not the main power source, mileages can be extended by mounting panels on the car’s exterior. Hyundai Motor Company applied the “Solar Roof System” to the Sonata Hybrid that increases possible mileages and prevents battery discharge by charging car batteries with sunlight. The Sonata Hybrid with the Solar Roof System can run a total of 1,300km longer per year when it is charged for six hours a day outdoors. Toyota Motor Corporation has launched the Plug-in Hybrid Electric Vehicle PRIUS with solar PV panels and Audi AG has embarked on a project to extend mileage by charging electric car batteries with roof-mounted solar panels. A Dutch start-up by the name of Lightyear has unveiled “Lightyear One,” a solar PV car prototype, for which solar PV panels with 12km per hour generating efficiency are installed across the 5㎡ roof of the vehicle. 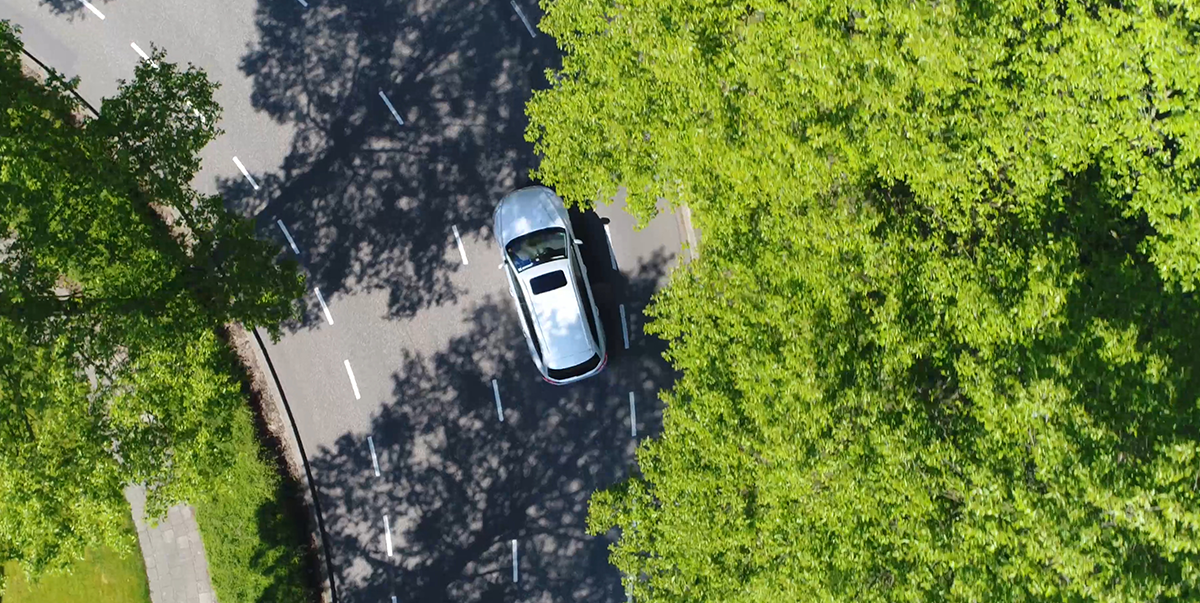 Thanks to tightened environmental regulations, eco-friendly car support policies by governments around the world, and consumers’ increasing preference for eco-friendly cars, the global eco-friendly car market is expected to continue its rapid growth. Bloomberg New Energy Finance forecasts that 10 million electric cars will be sold in 2025, rising to 28 million in 2030. Moreover, according to the International Energy Agency (IEA), hydrogen fueled cars are expected to increase from 100,000 in 2020 to 2.4 million in 2030.

However, alongside the predicted increase in production and consumption of eco-friendly cars, there are also some concerns about the actual eco-friendliness of eco-friendly cars. It has been pointed out that because the life of electric car batteries is limited(about seven years), the resulting large volumes of dead batteries can cause serious environmental pollution when left abandoned. There iseven the remote possibility that they could explode.

Eco-friendly energy solutions leader Q CELLS has launched a new R&D initiative in order to solve such problems with new technology. Last May, Q CELLS, in partnership with Hyundai Motor Group, signed a business agreement on “Joint Development of Solar PV-connected ESS and Project Collaboration.” It is a development project that enables dead batteries of old electric cars to be used in home ESS through recycling. The project enables the automobile industry to solve the problem of dead battery disposal and Q CELLS to manufacture ESS at lower costs than before. It will provide an opportunity for the company to take the lead in disseminating eco-friendly energy by providing home ESS to consumers at a lower price.