The COVID-19 pandemic has been sweeping the world for more than a year now, and the lessons from it are broad and complex. As can be seen from the phrase ‘New Normal of Civilization’, which has been heavily discussed, the lessons encompass ‘comprehensive issues’. One of the elements is a paradigm shift in the socioeconomic system. The so-called “Korean New Deal,” announced by the Korean government in July last year, also falls in line with this transformation.

Underpinning the transformation is the following flow of changes: As witnessed with the rapid spread of online shopping, telecommuting, and remote education due to COVID-19, the transition to the digital economy has been expedited due to increasing ‘contactless’ activities. As awareness of climate change and other environmental issues is heightened, interest in a low-carbon, eco-friendly economy has grown. Demand for reinforcement of the social safety net, including stable employment, is also becoming stronger, as labor market reform is progressing rapidly due to rapid changes in the economic environment, such as the job crisis and acceleration of the digital economy.

The basic structure of the Korean New Deal, which is closely aligned with the above trend, consists of two pillars – the Digital New Deal and the Green New Deal - that prioritize the strengthening of the safety net. The government’s plan is to focus on investment of 160 trillion won (the national budget is 114 trillion won) annually into a total of 28 projects in three areas, comprised of the Digital New Deal, the Green New Deal, and Reinforcement of the Safety Net, creating 1.9 million new jobs, markets and demand in the private sector by 2025. The Green New Deal consists of three main axes, including the green transformation of cities, spaces and living infrastructure, spread of low-carbon, decentralized energy sources, and establishment of an innovative ecosystem of green industries. The goal is to create 659,000 green jobs by investing 73.4 trillion won in the Green New Deal alone by 2025. 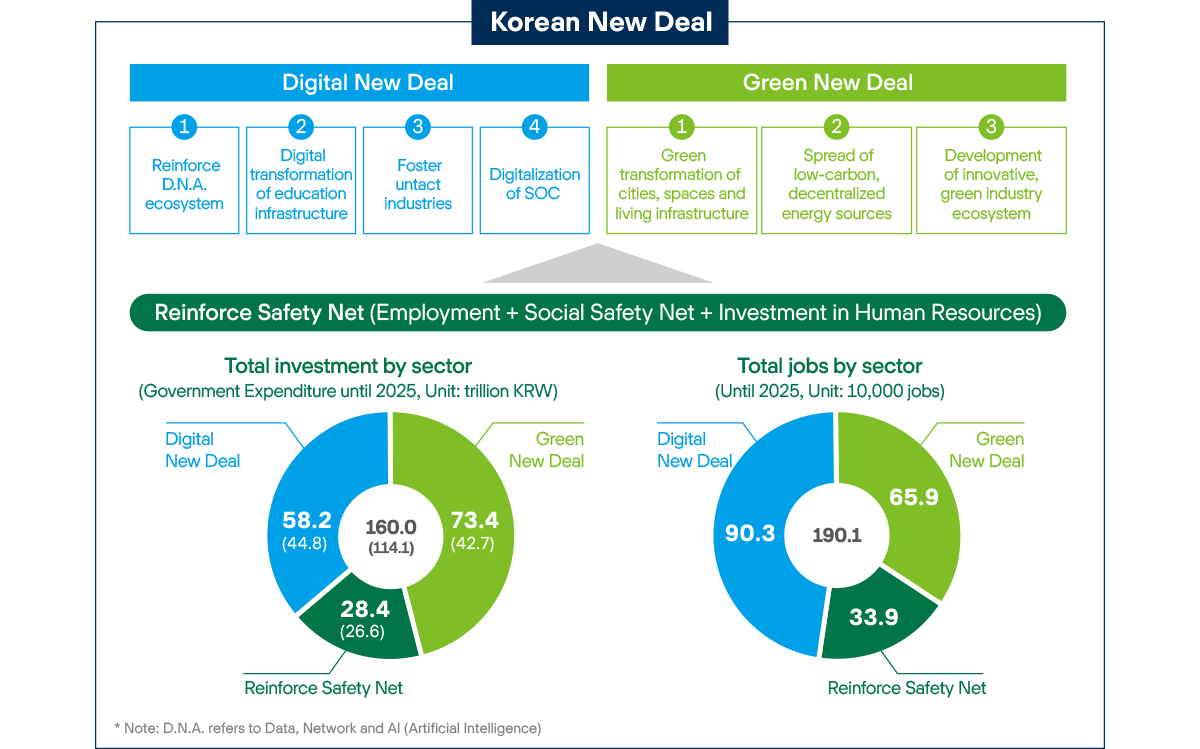 Living in the “Zero Carbon Era”

Korea was ranked 9th in the world in carbon dioxide emissions as of 2019. Although the ranking is down from 8th in 2018, Korea is still emitting greenhouse gases at an unacceptably high level. This is why Korea has been designated a “climate villain country.” Therefore, the Korean government’s declaration of “carbon neutrality by 2050” on December 10 last year, following the Green New Deal, is rather belated. Carbon neutrality is already a global trend. Currently, more than 120 countries have declared or are in the process of achieving carbon neutrality by 2050.
The frontrunner is Europe. The European Commission announced the “European Green Deal” in December 2019, with the vision of making Europe the world’s first carbon-neutral continent by 2050. A budget of more than 1 trillion euros will be injected to this end.
The movement of the United States is also noticeable. The new administration headed by Joe Biden will immediately rejoin the Paris Climate Agreement, from which Donald Trump had previously withdrew. The new president also pledged to create up to 10 million jobs through related infrastructure projects and to pour $2 trillion into clean energy expansion over the next four years of his presidency. Through these efforts, the US plans to achieve carbon neutrality by 2050 and decarbonization of its power generation sector by 2035.
Changes in China are also receiving attention. China, the world’s largest carbon dioxide emitter, insisted on imposing differentiated responsibility between developed countries and developing countries with respect to the demand for China to reduce carbon emissions. As pressure from the international community increased, China recently announced a carbon neutral target by 2060.
Corporations are no exception. In 2015 Siemens, for example, was the first among global companies to declare carbon neutrality by 2030. Microsoft announced in 2019 that it will raise a USD1 billion “Climate Innovation Fund” to achieve carbon neutrality by 2050. Many other companies, including Nestlé, Google, and Amazon, are joining this movement. This is the beginning of the “carbon zero era” where it is difficult for governments and businesses to survive without significantly reducing or eliminating carbon emissions.

Due to the abovementioned reasons, the renewable energy industry continues to grow despite the global economic contraction due to the COVID-19 pandemic. The ‘Renewable Energy 2020’ report recently released by the International Energy Agency (IEA) predicted that renewable energy for power generation alone will grow by 7%, while global energy demand declined by about 5% in 2019.
The “World Energy Outlook 2020 (WEO-2020),” released by the IEA in October 2019, provides an outlook for the next 10 years. According to this forecast, renewable energy is expected to account for 80% of global electricity demand growth over the next 10 years. In addition, although hydroelectric power would remain the largest renewable energy source, solar power is expected to lead the growth of the renewable energy market, followed by wind power. In this regard, IEA Secretary General Patti Virol emphasized, “Solar power will set a new record in the global power market including double-digit growth.”

Source | International Energy Agency
One of the major reasons behind this progress is the achievement of grid parity, meaning the cost balance between fossil fuel power generation and renewable energy power generation. In other words, the cost of producing renewable energy is falling rapidly thanks to advances in technology. For example, according to the International Renewable Energy Agency (IRENA), renewable energy generation costs have decreased by 82% for solar power and 39% for offshore wind power over the past 10 years. According to a report by energy consulting firm Wood McKinsey, the cost of renewable energy (LCOE) is expected to decline compared to coal by 2030 in most energy markets in the Asia-Pacific region. In particular in Korea, Thailand, and Vietnam, renewable energy electricity costs are predicted to be lower than coal in 2021. This trend is expected to continue.
Amid this trend, a seismic change is taking place in the global energy market. While ultra-large oil companies that have reigned as the dominant power in the energy market for many years are being forced into a corner, renewable energy companies are making remarkable progress. Even though it was only for one day, the market capitalization of Next Era Energy in the US in October 2020 briefly exceeded the enterprise value of ExxonMobil, which is considered the world’s largest energy company. This means the era of fossil fuels centered around oil is coming to an end.

Outlook and Challenges for Renewable Energy in Korea

The Korea Institute for Energy Economics recently predicted that total energy consumption in Korea in 2021 will increase 3.9% compared to 2020, based on the Korea Development Institute’s (KDI) forecast for economic growth of 3.1%. Oil and natural gas will increase by 4.3% and 7.3%, respectively, and renewable energy and other energy sources will increase by 8.5%, which is very encouraging. It is inevitable that coal consumption will decline.

Source | Korea Energy Economics Institute
Based on the electricity consumption outlook, the Korean government announced on December 28 last year the 9th Basic Plan for Electricity Supply and Demand 2020-2034, which includes the plan for energy facilities. According to the plan, total installed capacity renewable energy is forecast to grow 400%, with a 2.6-fold increase in the share of Korea’s total energy mix. During the same period, the shares of coal and nuclear energy will be almost halved to 15% from 28.1% and 10.1% from 18.2%, respectively.
On December 29, 2020, the Korean government deliberated and confirmed the ‘5th Basic Plan for Renewable Energy.’ The target percentage of new and renewable energy generation in 2034 was set at 25.8% according to the 9th supply and demand plan. The goal is to achieve innovation in five areas, comprising the dissemination of new and renewable energy, market, demand, industry, and infrastructure, and to further expedite the transition to a low-carbon economy based on that innovation. 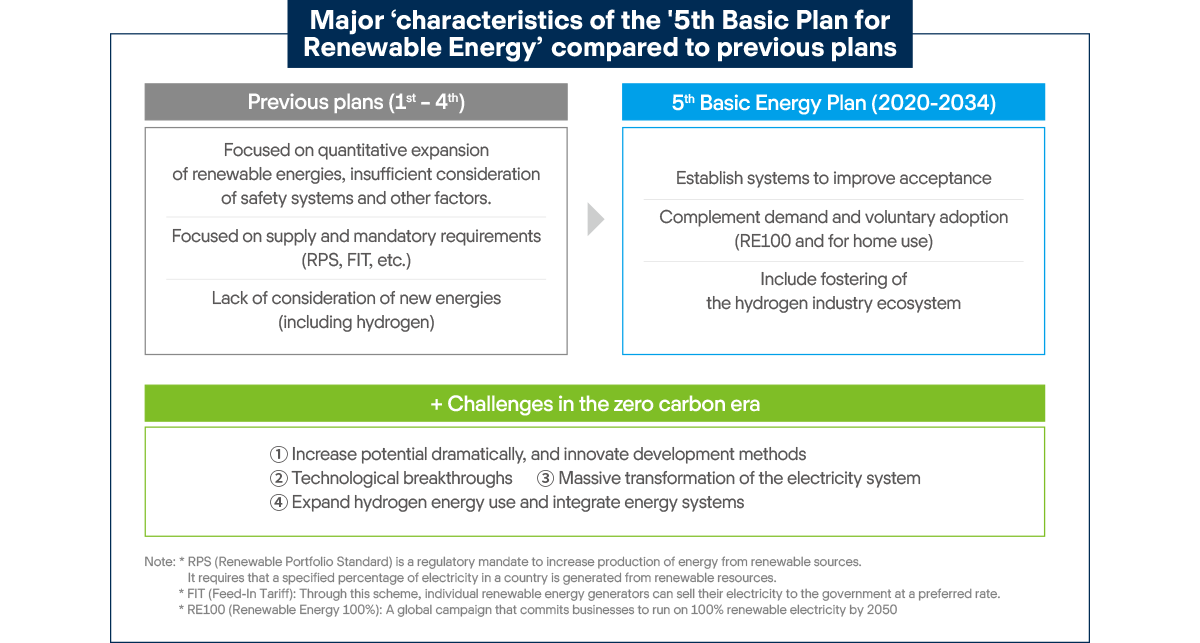 Source | Ministry of Trade, Industry and Energy
With the declarations of the Green New Deal and Carbon Neutrality, Korea is taking steps towards expanding renewable energy to innovate energy systems and realize a low-carbon economy. However, Korea needs a greater impetus. Currently, 60 coal power plants are in operation in Korea. In addition to these, seven units are currently under construction. It is estimated that 30% of Korea’s greenhouse gas emissions and 11% of fine dust comes from these plants. This poses a challenge to achieving zero carbon emissions by 2050.
The concept of renewable energy expansion is not complete simply in terms of environmental protection. It is essential not only for human survival, health and safety, but also for a robust and sustainable economy. It can also provide a foundation for companies to expand, and develop new business opportunities. For a long time, Korea has been moving ahead on the straight highway towards industrialization and economic growth. Now is the time to make haste in changing the socioeconomic paradigm, as Korea confronts the unprecedented complex crises of the COVID-19 pandemic and climate change. One of the key drivers of this transformation is, and will for the foreseeable future be, renewable energy.